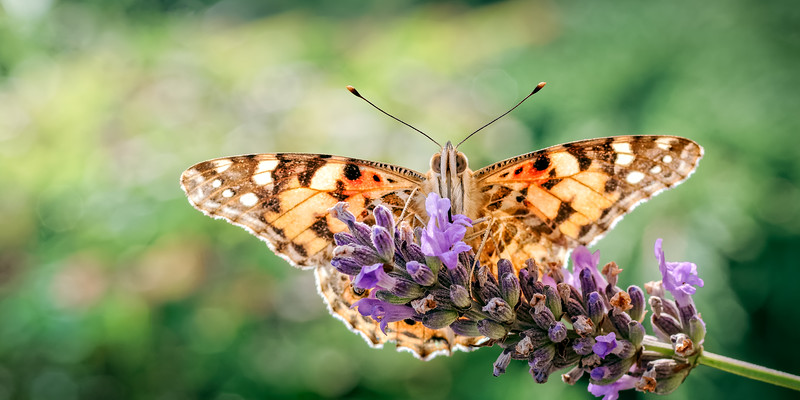 Photographed on the Saturday 10 September 2016.
This is an image of the Painted lady butterfly, Vanessa (Cynthia) cardui or simply Vanessa cardui, feeding (nectaring) on lavender. The Panted lady belongs to the Class Insecta, Order Lepidoptera, Family Nymphalidae, Subfamily Nympalinae, Tribe Nyphalini and Genus Vanessa. In America it is known as the ‘Cosmopolitan Butterfly’ and has one of the best global distributions of all the butterflies.
The Painted Lady falls within the group, Admirals, Tortoiseshells and Fritillaries. The European form migrate from the desert edges of North Africa and Arabia to reach Britain every year and the Orkneys 2-3 times a decade. In exceptional summers they can penetrate above the Arctic circle in distances exceeding 3 000km. In the autumn it has been demonstrated that the offspring migrate back and in the case of the arctic explorers this can be a round trip of up to about 9 000 miles, taking in several generations. What causes swarming and migration is unclear but some insects are known to swarm when the population reaches a specific level of density in numbers, changing the behaviour of the population. In the largest of swarms containing millions in number and where it is known the Painted lady requires at least a metre of space each within the swarm, these flights cast great shadows over the land. Though in Britain the swarms and numbers of immigrants are less so than that of their continental counterparts. They can be seen almost everywhere there is a food source in the UK, but their preferred habitat is dry open terrain such as heaths and dunes. These butterflies mate regularly and at any opportunity, presumably as a inborn need when migrating to ensure the return of the offspring in autumn. Both sexes feed frequently on flowers and the females disperse after mating to find thistles on which to lay eggs. They use a wide range of thistles species and show a preference for any that are tall, prominent and have fresh leaves. It