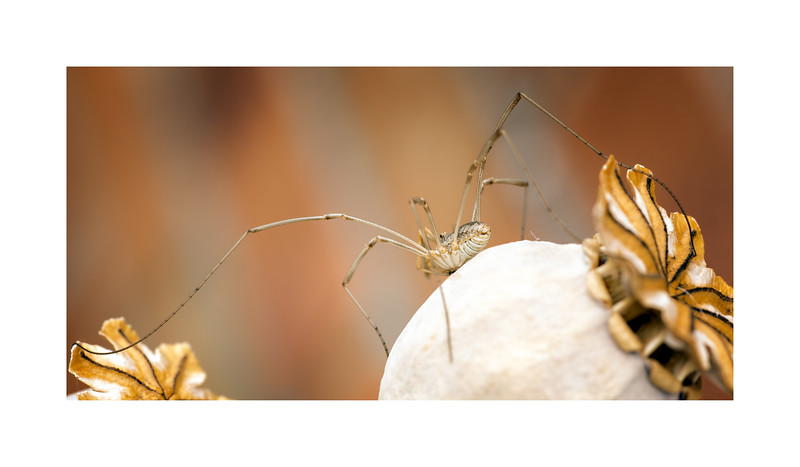 Photographed on the Thursday 13 August 2015.
This harvestman was photographed in my back garden. Harvestman are the third largest order of the arachnids but are not true spiders. The order has about 3500 species worldwide, many of which are tropical. NW Europe has about 27 native species. Unlike most other arachnids there is no prior courtship and insemination is direct, taking place face to face. The male has an extendable penis that can extrude forwards between the chelicerae (which contain the fangs) and into the oviduct. Mating can last a few seconds to several minutes depending on the species and is repeated frequently, often every time the sexes meet. They do not produce silk or spin webs, but ‘ambush’ small soft bodied arthropods such as springtails, flies, aphids etc. Unlike spiders they will also feed on carrion and decomposing vegetable matter. One species (Trogulus tricarinatus) specialises in eating snails. The name Harvestmen may come from the fact that many species are most visible around harvest time. In the USA these spiders may be referred to as Daddy-long-legs, whilst in the UK the same name refers to the spider Pholcus phalangiodes (cellar spider).
Rilaena triangularis also known as the Spring Harvestman is common and widespread throughout the UK and the world with a few exceptions (Mediterranean, N Scandinavia and high Alps), including the USA. All invertebrates with exoskeleton and jointed appendages belong to the Phylum Arthropoda and Harvestmen belong to the Class Arachnida, Order Opiliones. The ‘Spring Harvestmen’ belong to the Family Phalangiidae, Sub-family Phalangiinae and Genus Rilaena. It has unusually large oculariums (eye hills or raised eyes) and have a slightly different life cycle to other harvestmen in temperate regions. Most species pass the winter either as eggs (usually long legged species) or as an adult (usually short legged species), Rilaena triangularis does this as a juvenile. Therefore is often the 1st adult seen i

From Wildlife: Spiders & other Arachnids